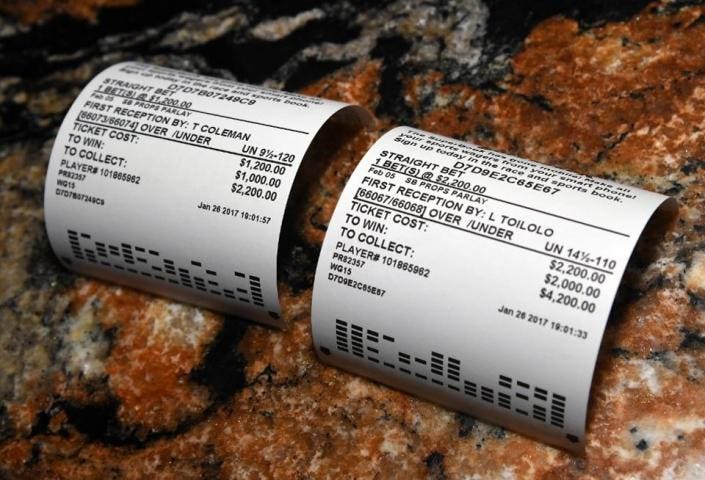 Betting tickets could potentially be printed in states other than Nevada depending on what the U.S…. [+] Supreme Court does in 2018. (Photo by Ethan Miller/Getty Images)

The U.S. Supreme Court has an important sports-related decision to make in 2018. Should it rule to repeal the Professional and Amateur Sports Protection Act (PASPA) and put an end to the federal ban on sports betting? If so, the repeal could result in numerous states adopting some form of regulated sports betting system, bringing in massive annual revenues for states with budgets that have a great need for a monetary stimulus.

The best case for a U.S. regulated sports betting market by 2023 would be a total of thirty-two states offering regulated sports betting, which may result in a market worth $6.03 billion in annual revenue according to a new report from boutique research firm Eilers & Krejcik Gaming. The firm estimates that in 2017, while full sports betting is technically illegal outside of Nevada, $2.5 billion to $3 billion is being earned from offshore bookmakers from individuals based in the U.S. who are betting illegally. Additionally, it is suggested that twelve million to fifteen million Americans are currently active illegal sports bettors, not including “social” or “casual” bettors who are not staking much money and only sparingly wagering on sports.

While PASPA remains in effect, it has not prevented interested states from at least outlining prospective regulations should they be able to sponsor sports betting in the future. In fact, Connecticut has already passed legislation that will authorize regulations if/when PASPA is repealed.

Along with Connecticut, it is believed that Colorado, Delaware, Indiana, Massachusetts, Michigan, Mississippi, Montana, New Jersey, Ohio, Pennsylvania, Virginia and West Virginia will be the first group of states to push through legislation to offer sports betting in an environment unchecked by the federal government. States like Alaska, Hawaii, South Carolina, Tennessee, Texas and Utah may be the least likely to ever offer sports betting within their borders.

And do not expect the sports leagues to ever become directly involved in the action. Eilers & Krejcik Gaming does not believe that any major U.S. professional sports leagues have any interest in serving as operators of a betting product. Instead, the leagues would benefit from data fees, content fees and marketing partnerships, as well as through an enhancement in consumer interest based on having more action on the games. ESPN and other media entities may also benefit as a result of consumers wanting unique content dedicated to sports betting

Interestingly, Eilers & Krejcik Gaming does not believe that regulation of legalized sports betting outside of Nevada would suppress the growth of casino sports betting within the state. Factors that should continue to support growth are the introduction of professional football and hockey teams into the market, an increase in marquee sporting events, macro growth of Las Vegas as a tourist destination and expansion of wagering beyond traditional sports events. As such, it is suggested that an estimated $250 million in sports betting revenue for Nevada in 2017 increases to almost $450 million in 2023 with sports betting permitted in other states.

Darren Heitner is the Founder of South Florida-based HEITNER LEGAL, P.L.L.C. and Sports Agent Blog. He authored the book, How to Play the Game: What Every Sports Attorney Needs to Know.

SportsBookLive
Welcome to SportsBook-Live.com. We offer Online gaming Live SportsBetting, Tickets, fan Merchandise, News and RSS feeds for all your Favorite Professional sports leagues. Join us for all of our Sports gaming Podcast's. http://SPORTSBOOK-LIVE.COM http://Nevada.SportsBook-Live.com
http://nevada.sportsbook-live.com

Hollywood continues to foster a damning image of casinos

Like many of you, COVID-19 mandates have made me more reliant on at-home forms of entertainment.